Yogi Berra uttered the redundant phrase, “it’s déja vu all over again,” and made it funny. There’s nothing fun about reading author Kate Atkinson’s book about déja vu all over again. Other books and movies based on the idea; The Time Traveler’s Wife and Groundhog Day come to mind, do a better job of making the time-shift paradigm enjoyable. 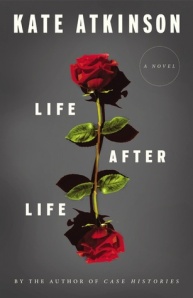 In Life After Life, the main character, Ursula Todd, is born on February 11, 1910. She dies at birth only to be born again and again on the exact night with different life outcomes the result of each re-birth. The book is not quite about reincarnation as it is about getting to relive your life over and over again until you get it right.

As Ursula, the precocious child in an upper-class home in the English countryside grows up, she is either raped in her home and lives with the gut-wrenching consequences or slaps her would-be rapist avoiding any second encounter; she either saves a young neighbour from a sexual predator, nearly becomes one of his victims or helps search for the missing girl; Ursula either becomes a confidant of Eva Braun or shoots Hitler herself before the war even begins.

Atkinson writes the story in a way that pivotal occasions in Ursula’s life are re-written over and over again with seemingly small but significant differences. For example, an encounter with two old ladies on a stairwell is re-written at least three times with the identical descriptions and conversations with one slight difference each time. Yet, the end results are the same. This section of the book feels like it was cut and pasted over and over again. I found it annoying to re-read.

Ursula not only has the ability to be re-born at the moment of her birth, she can jump out of windows as a teen and have a building fall upon her as an adult, die and come back again. This is where the book got murky, I wasn’t sure if Ursula’s varied deaths meant that she had to go back to her moment of birth and start over and ultimately, I didn’t know which of lives was her final one. Or, does she keep re-living her life forever?

This should have been an intriguing read full of what-ifs and if-onlys but despite its numerous awards, wasn’t.