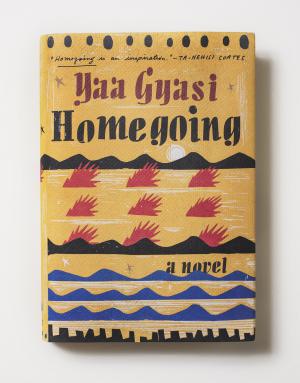 The author captures your attention and makes you want to know what happens to each generation of a family that is unaware the other half exists.

The novel begins with the story of two half-sisters born in Ghana who don’t know about the other. Effia stays in Africa and is married off to a British officer. Her side of the story is about her African descendants. The second half-sister, Esi, is kidnapped and enslaved and brought to the United States. Esi’s story is about her American descendants.

However captivating the narrative, it’s basically a collection of short stories. Each chapter recounts the story of one family member per generation. Sometimes there is only one person born that generation, other times there are many, but we only ever hear the voice of one. The chapters don’t carry forward from the previous. There’s a diagram of the family tree at the beginning of the book, which you’ll need to keep track of all the characters.

At the end of the book. seven generations later, a member of each family tree meet, not knowing they are related. They begin a relationship and end up going back to Africa and stand on the spot where long ago, two half-sisters stood at the same time unaware that the other existed. Effia, in her room overlooking the sea, while Esi is held captive in the dungeon below; the dichotomy that is The Castle.

Though fiction, the story is very insightful into the history of African Americans and their place in America today.The fiction is written around actual historical events.

You’ll be hard pressed to stop reading in the middle of a chapter, so authentic a portrait Gyasi paints.