Indian-American author Thrity Umrigar’s The World We Found does for middle-age women what The Sisterhood of the Travelling Pants did for teenage girls – use powerful experiences to create ageless friendships. Umrigrar has taken chick lit and steeped it in a potent brew. 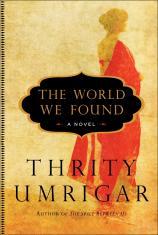 The novel is about how the dying wish of one woman leads to secrets exposed, acknowledging present disappointments and ultimately betrayal.  Armaiti is the character whom the story is centered around. She’s a transplanted Indian who left her country for post-grad studies in the States, ends up marrying locally and builds a life stateside. Her sudden grim prognosis moves her to contact her old college girlfriends back in India, who she hasn’t seen in 30 years, and ask them to visit her. It’s an unlikely beginning but Umrigar’s capable story telling makes it believable.

However, my book club pretty much agreed that we were left not understanding some of the actions and motivations of the leading characters – Armaiti and her gal pals Laleh, Nishta and Kavita. One married rich, betraying the socialist cause they once fought for, another leads a secret life, while the third is lead into an ultra-conservative Muslim existence.

The book is about the journey of overcoming 20 years of separateness and reconciling with choices made in life, rather than a grand reunion. In this book, Umrigar’s story telling is greater than her character building. If strong character development is your preference, then Umrigar’s The Space Between Us is for you.